Inflation Worries in the Federal Republic of Germany

Interview with Dr Helmut Schlesinger, Member of the Board of Management of the Deutsche Bundesbank, Frankfurt 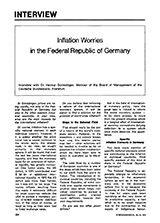 Dr Schlesinger, prices are rising rapidly, not only in the Federal Republic of Germany but also in the other western industrial countries. In your view, what are the main reasons for the international inflation?

Of course, inflation has a specific national element in each individual country. However, if it is asked whether the price trend has a cause common to the whole world, the answer must, in my view, be sought primarily in the monetary sphere. It will be found that over the last few years international liquidity, and thus the monetary basis for an extension of national liquidity, has greatly increased. One factor alone, the US deficit, in 1971 contributed over $ 30 bn of additional international liquidity. In 1972 the US deficit was more than halved, but it was still far too large. The money inflows resulting from this made it extremely difficult for most countries outside the USA to pursue a monetary policy directed towards stabilisation of the value of money, at least as long as they were tied to fixed exchange rates.

Do you believe that following a reform of the international monetary system, it will be easier to find a solution for the problem of world-wide inflation?

Steps in the External Field

That should really be the aim of a reform of the world's monetary system. However, in the meantime - and nobody knows how long this interim period may last - other solutions will be needed to throttle as far as possible the inflation mechanism which we have been able to watch in operation up to March 1973.

The joint float by a number of European countries is one of the steps which have been taken to cut adrift from the world inflation. The introduction in individual countries, including the Federal Republic, of strict controls over capital movements is another step which helps individual countries to pursue a stabilisation policy oriented more definitely towards their own requirements.

Do you see any other possibilities?

Not in the field of international monetary policy. Here the great task is indeed to reform the world monetary system - to be more precise, to move from the present situation which is a tangled affair of international currency connections defying definition to a system which once more deserves this appellation.

You have made mention of specific national elements which are contributing to the inflation in individual countries. What specific element of this kind is there in the Federal Republic of Germany?

Particularly intense efforts have been made of late by the Federal Government and the Bundesbank in order to achieve at least a measure of stability in the Federal Republic. How do you assess these stabilisation efforts?

The Chances of the Stabilisation Efforts

I believe that the policy mix currently used in the Federal Republic - a highly restrictive monetary policy, on the one hand, and a wide-ranging fiscal stabilisation programme, on the other - gives us a chance to suppress the present tendency towards escalating prices and bring about a change so that after a while prices will rise more slowly. A necessary condition for this however is in my view that the stabilisation efforts should be continued for a relatively long time and in a highly restrictive manner.

Do you agree with the critics who say that the stabilisation programme of the Federal Republic is unbalanced in that it hits investment in a very one-sided way compared with consumption, especially if the policy of the Bundesbank is taken into account?

In principle, I think, this objection cannot be refuted. The measures taken have only a slight direct impact on private consumption. However it should probably be added that basically any kind of anticyclical policy must be brought to bear on investment because the latter is a particularly dynamic element in a cyclical upturn.

Despite the restrictive money policy pursued hitherto the capacity of domestic enterprises to make use of credit does not seem to have been impaired. Can the high interest policy of the Bundesbank be further intensified?

Well, the term "high interest policy" may need qualifying. It is admittedly true that interest rates in the Federal Republic are at an unprecedentedly high level. But it is also true that the inflationary trend has never been as pronounced as it is today. If we compare the two, it is indeed not even quite certain whether the present interest level is really sufficiently high to act as a brake in the investors' calculations or, expressed differently, whether it really contributes to a reversal of investment planning by the enterprises. For this reason a further rise of the interest level cannot be ruled out in the Federal Republic.

But I should like to return to the starting point for your question and add that while the absorptive capacity of domestic enterprises for credit so far does not appear to have weakened, today's borrowings are actually the outcome of yesterday's investment planning. For this reason we cannot expect credit policy to exert an influence for some little while yet, until the current alterations to investment plans lead to changes in the demand for credit.

A domestic stabilisation policy cannot be successful unless protected by external safeguards for damping foreign demand. What possibilities are left to national economic policy in the European Community?

I can fully subscribe to your first statement: a policy of stability for the domestic economy requires external safeguards. Given progressive European integration, it goes in my opinion without saying that such external protection can be provided only jointly - also in the monetary sphere. The present joint float by a number of European Community countries is such a protective device. So are the controls on capital movements operated in common though by different methods.

I am therefore - also after the renewed DM revaluation - optimistic that we will reach within the European Community a better harmonisation and coordination of economic policies. The harmonisation of both the cyclical trends and the economic decisions based on them has to my way of thinking already made more progress inside the nucleus of the European Community, i.e.: the old EEC countries - perhaps with the exception of Italy - than is sometimes assumed. And the conceptual aims do not by any means diverge as widely as was possibly still the case a few years ago - to say nothing of the fact that even in regard to the inflation rates in the various countries the trend of development no longer shows any significant differences. Unfortunately, it must be said, prices in the Federal Republic have for years been developing absolutely parallel to those in France and other important neighbouring countries with which we are closely involved. To this extent there has thus been a harmonisation of trends, and we can also note initial moves of significance towards the harmonisation of policies. 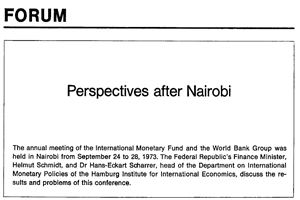 Towards Reform of the Monetary System by Helmut Schmidt