On the Way to the Next Monetary Crisis

The euphoria felt after the monetary decisions in Washington was justified. A trade war on the international level had seemed to be in the offing and was avoided. With the immediate threat thus averted, a lasting solution of all monetary problems however Is still not in sight. 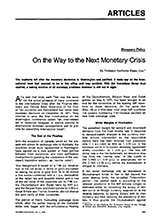 All's well that ends well! That was the tenor if not the actual phrasing of many comments in the international press after the Finance Ministers and Central Bank Governors of the Club of Ten countries and Switzerland had taken their monetary decisions on December 18, 1971. They referred to what the final communiqué on the Washington conference called "an inter-related set of measures designed to restore stability to international monetary arrangements and to provide for expanding international trade".

The End of the Floating

With the exception of Canada, which for the present still allows its exchange rate to fluctuate, the countries which were represented in Washington have agreed on a new system of fixed parities between their currencies and their notification (realignment)—pending the completion of the necessary legislative action—as "central rates".

This realignment is based on a 7.89 p.c. devaluation of the US dollar in terms of gold—equivalent to raising the price of gold from 35 to 38 dollars a fine ounce—combined with a 1 p.c. devaluation of the Italian lira and Swedish kronor and a rise of the par value of the Japanese yen by 7.66 p.c., the Deutschemark and Swiss franc by 4.61 p.c. and the Belgian franc and Dutch guilder by 2.65 p.c. Great Britain and France, however, did not change the gold parity of their currencies.

The period of freely fluctuating exchange rates which, after the earlier freeing of the Canadian dollar rate, began with the simultaneous floating of the Deutschemark, Belgian franc and Dutch guilder on May 9, 1971, has been brought to an end for the currencies of the leading IMF members by these decisions. On the same day (Dec. 18) or a little later most other IMF countries—at present numbering 119—likewise decided on new fixed exchange rates.

The permitted margin for upward and downward deviation from the fixed middle rate in response to demand-supply changes in the currency markets without intervention by the responsible central bank has been widened from previously only ± 1 p.c.—and as little as ± 0.75 p.c. in the narrower circle of European Monetary Agreement
(EMA) countries— to ± 2.25 p.c. The new US dollar rate of the Deutschemark, for instance, may rise from the "central rate" of OM 3.2225 to DM 3.2950 (+ 2.25 p.c.) or alternatively fall to OM 3.1500 (-2.25 p.c.) before the Bundesbank is obliged to intervene.

If the dollar exchange rate as expressed in Deutschemark tends to rise or fall beyond the outer dealing limits, the so-called "intervention points", the central bank is according to the relevant provisions in the IMF Articles obliged to intervene either by increasing the supply of dollars out of its foreign currency reserves or, in the reverse instance, by buying dollars with its own currency and thus reducing the availability of dollars. It thus guards the Deutschemark against depreciating (or appreciating) further in terms of the dollar and at the same time, inversely, shields the dollar against further appreciation (or depreciation). Such a policy of exchange rate stabilisation however will have the intended result only in the absence of such a far-reaching and/or persistent disequilibrium that the central bank cannot cope with it by using its potential for intervention by means of available currency reserves or because of the problem of importing inflation.

This view is correct in principle but, as will be pointed out later, subject to qualification and mitigation.

In order to get a grip on the imbalances which have disrupted international payments and trade relations more and more violently in recent years not only from the currency and monetary side respectively but likewise from the goods side, and so as to prevent them from recurring in future, it was, besides, agreed in Washington that the USA, on the one hand, and the EEC, Japan and Canada, on the other, should enter into immediate negotiations on a number of trade policy measures. Apart from a progressive expansion of mutual trade flows in the long term, they have all the particular short-term aim of restoring the balance of the US balance of payments, which is suffering from a chronic deficit, by ending the discrimination against US exports which in the American view is ingrained in the price and quota policies of the aforementioned countries and, at the same time, lessening the trade distortion ensuing in the opposite direction from preferences enjoyed by exports from these countries to the USA. The Nixon Administration expects chiefly the EEC to make concessions in this direction, including in particular a re-examination, and modification with an eye to US balance of payments interests, of the preferential agreements concluded or projected between the EEC and third countries, as well as of the effect which the EEC's agricultural arrangements have in shutting the market to outsiders. These US interests are affected, i. a., by the current EEC negotiations with Austria which aim at tariff cuts of 30 p.c. on both sides. The Americans think that such special arrangements discriminate against their own exports, though they purposely overlook that the average of their own import tariffs has hitherto been above the EEC one.

As a first practical step the USA has decided to rescind with immediate effect the 10 p.c. import surcharge and the "Buy American" clause granting a 7 p.c. tax benefit exclusively to investment goods made in the USA, which accompanied the suspension of the dollar's convertibility on August 15, 1971. This decision, together with the devaluation of the dollar, cleared the road for the general realignment of exchange rates.

Appreciating rightly that the measures mentioned so far cannot bring about a comprehensive and enduring solution of the complicated monetary problems, the Ministers and Governors assembled in Washington also agreed in principle on the need to start as quickly as possible on preparatory investigations for a longer-term reform of the international monetary system. There are four aspects to be discussed in detail:

Although the unquestionably crucial problems of a reform of the present monetary system thus still await examination, President Nixon at the end of the Washington conference personally joined in the thanksgivings for deliverance by remarking that the new agreement was the most important one in the world's monetary history. According to the Federal Minister of Economics and Finance Schiller it is a "technical master-piece" which, and that was the unanimous view of all who attended the conference and many commentators afterwards, should be regarded as a convincing manifestation of the solidarity of the western world.

An answer to the question to what extent such and similar statements seem justified evidently depends primarily on the point of view from which the Washington decisions are judged. Viewed entirely against the background of events since the spring of 1971 they may indeed be described as an impressive result. An essentially different conclusion however is reached if the appraisal is extended to include the more intricate causes of the preceding events and the problem to be solved in the future.

Looking back on the period of floating exchange rates which began in the early May of 1971, three achievements of the Washington conference in particular must be acknowledged:

These unquestionable achievements of the Washington conference cannot however obscure the fact that the modification of the Bretton Woods system has provided no more than a breathing space which must be used as quickly as possible for the thorough reform which the system is rightly thought to need. The experience gained during the floating can prove extremely useful in this connection. After a prolonged controversy clarity may now be assumed to exist on three points in particular:

It appears to be all the more urgent to make use of this knowledge because the decisions of Washington have resulted in partial solutions only and these are moreover likely to be effective for a limited time. Hence they cannot by any means be considered a "technical master-piece" but there is much more justification for regarding them as an extremely fragile artifice.

In the short term the vulnerability of the arrangements made is chiefly due to the fact that the new currency parities do not conform to the results of the preceding period of flexible exchange rates. They reflect rather a general compromise largely determined by the economic interests of the participating countries at the time it was reached. New strains are therefore bound to show themselves as soon as a major change occurs in the economic situation compared with that at the time of the Washington decisions, which is generally expected for the second half of 1972 already and at the latest in the first half of 1973

The problem may be illustrated by the following practical example: In view of the recessive features in the German economy the Deutschemark was in effect devalued in Washington in relation to its previous higher value which had resulted from the floating, namely, from 6 to 3.5 p.c. against other EEC currencies, from 6.2 to 4.8 p.c. against the Club of Ten countries and Switzerland, and from 7.5 to 6.5 p.c. against all other IMF countries. Bearing in mind that the German export surplus continued to increase even when the exchange rates were floating and that the EEC's opportunities for trade concessions to the USA are narrowly limited, there are good grounds for expecting another German export boom with all the concomitants and consequences it is now known to entail, including eventually a new monetary crisis.

If it may thus be said in general that new imbalances are likely to arise in international trade and monetary relations in the short term already, the widening of the bands will not make them any less likely, and this for three reasons: In the first place, inflationary tendencies of varying strength and divergent credit costs may easily prove more potent than the "earthquake resistance" which it is hoped greater exchange rate flexibility will bestow on the new system. Secondly, if this danger is surmounted, which seems a highly questionable assumption, the individual countries can exploit the greater scope for independent action resulting from the widening of intervention points for operations against other countries. Thirdly, it must be borne in mind that suitable methods are still lacking for bringing control and an effective influence to bear on the short-term capital movements in the eurodollar market which are obviously largely of a speculative nature. The size of this market has meanwhile been estimated at approximately $ 60 bn.

The monetary policy makers assembled in Washington were quite right to stress the need for a thorough reform of the existing international monetary system in the longer term. They did not however advance beyond tracing in general terms the various directions in which such a reform should be sought as soon as possible. In the light of experience to date and further developments which can already be discerned it can however hardly be doubted any longer that a way out of the continuing monetary dilemma will be found only if the following conditions are met satisfactorily:

In the light of past experience nobody will dare to predict in earnest whether these conditions for a thorough-going successful monetary reform will ever be fulfilled. It is certain however that a satisfactory solution will take very long. In the meantime the present monetary system will for the reasons given always be liable to succumb to another crisis because the repairs carried out in Washington will last only for a short while. This fact cannot be altered by pronouncements, however resounding they may be. 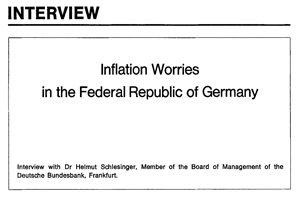