The Single Market - A Case of Mislabelling?

At the Edinburgh European Council the European Community leaders proclaimed the completion of the single European market thus setting a formal seal on the Single European Act. But does the Community really have a single market worthy of the name now, or will it have one in the foreseeable future? Have the expectations raised by EC '92 been met? 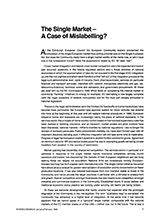 Closer market integration and keener cross-border competition are to be expected and have in part occurred, especially in the heavily regulated sectors and in those activities of national economies in which the approximation of laws did not succeed in the first stage of EC integration up until the mid-eighties and which were therefore atfirst "left out" of the integration process at the legal-cum-administrative level: parts of industry (food, pharmaceuticals), services (in particular financial and transport services), branches with network monopolies (electricity and gas, rail, telecommunications), technical norms and standards, and government procurement. All these are dealt with by the EC Commission's 1985 White Book on completing the internal market or covered by "flanking" initiatives (in energy for example). EC lawmaking is now largely complete (with the major exception of network monopolies) and for the most part already embodied in national legislation.

Thanks to the legal-administrative work the frontiers for foodstuffs and pharmaceuticals have become more permeable; the European type-approval system for motor vehicles has entered into force at the beginning of this year and will replace national procedures in 1996; European industrial norms and standards are increasingly taking the place of national standards. In the services sector, the principle of home country control based on harmonized supervisory rules has been realized in banking, insurance, and air transport; market access and price controls have been liberalized, national markets- hitherto shielded by national regulations- are no longer the domain of domestic producers. Public procurement markets, too, have been forced open with all important directives standing even if effective integration will still take some time to materialize. Progress in legal harmonization made it possible to abolish frontier controls for goods. Agreement on minimum rates for VAT and excise duties paved the way to exempting goods carried by private travellers from taxation in the country of destination.

Market opening has discernibly sharpened competition. The services sector in particular is in upheaval in response to the single market: banks, insurance companies, airlines, tourist operators and traders "are discovering" the markets of their European neighbours and are busy staking these out, largely via acquisition. National firms are increasingly turning European. Industry has long had its European (and international) side. The single market initiative has acted here above all as a catalyst for greater rationalization of production and its concentration on fewer production locations. It has also induced businesses from non-member states to invest in the Community and hence provide the target countries in particular with a stimulus to employment and growth. Keener competition amongst businesses has also meant more competition amongst industrial and commercial locations in the Community. Established levels of social welfare and traditional economic policy practice are coming under scrutiny, old habits are being broken.

All these are welcome developments that hardly anyone had expected after the prolonged stagnation of the Community in the mid-eighties. The term "qualitative leap" is warranted: the Community has advanced to a higher level of integration. At the same time it has become apparent that we cannot speak of a "genuine" single market, comparable with the national markets of the EC member states or of the USA- neither now nor in the future. This is less a problem of some Community legislation being retarded, on free access to electricity and gas networks or cabotage in road haulage for example, or that many directives have not yet been embodied in national law, or the postponement of the start of the "single market" in certain cases, in life assurance for example. These are largely transitional problems that do not in themselves compromise the final outcome.

There are other more fundamental issues: first, the principle of mutual recognition, a cornerstone of the single market strategy, will not by any means lead "automatically" to the opening of national markets in as far as access is regulated by national legal norms or product standards. Here there is a need to adjust the national provisions and this may still have to be imposed on a case by case basis by the European Court of Justice. Second, buyers of foreign goods or services or those produced in line with foreign norms are subject in many cases to tax disadvantages (life assurance), are not eligible for public assistance or only to a limited degree (buildings) or are only permitted to purchase a restricted quota due to regulative provisions (gilt­-edged investments).

Third, customs formalities have in many cases not been abolished but simply shifted from the borders inland, in part to businesses themselves. Cross-border deliveries of goods and services still entail additional administrative costs. Fourth, the transitional system for value-added tax forces businesses to record shipments to customers in the EC separately from those to domestic customers as well as to buyers in non-member states and report each EC transaction individually on a periodical basis. Experts say that as of 1993 exports to countries outside the EC will be easier to administer than those to EC countries, an outcome that casts doubt on the very rationale of the single market. Fifth, the Maastricht Treaty expressly includes the option of upholding or reintroducing controls on capital movement. Also, contrary to expectations and the logic of the single market, Article 115 of the EEC Treaty was not deleted in the Maastricht Treaty, but underscored and, in the view of many observers, even more strictly worded.

The crucial point, though, is that the single market will not constitute a single legal area even in future. As a result of the inevitable - and desired - scope for translating EC directives into national law, existing material trade barriers and competition distortions are often only partly rolled back; businesses and employees will in future still have to inform themselves about the legal norms and standards in force nationally before establishing themselves or taking up work in a given country. The law prevailing in the Community remains intransparent; in many cases new barriers simply replace the old ones: each EC directive spawns twelve different national ordinances, in some cases extremely voluminous works.

The stress laid on the principle of subsidiarity in the Maastricht Treaty and at Edingburgh has paved the way to institutionalizing this legal motley. After the EC Commission's "zealous harmonization" in the first single market phase, supported by the member states, which resulted in numerous excesses (the operation of paternoster lifts, butchers' licences, etc.), the pendulum looks like swinging back to the opposite extreme, thus threatening to erode the single market achievements to date. Is the bottle half-full or half-empty? One thing is clear: the present set-up is at best a (further) milestone on the long road to the single market and a far cry from the real thing.

Unlike its internal relations, the Community is already monolithic in its dealings with non-members. Fortunately, fears that the Community would degenerate into a "Fortress Europe" in this connection have proved exaggerated, but evidently the Community is not playing the constructive world economic role which would be in keeping with its size and power - in GATT, towards its major trading partners, in its relations with the developing countries and eastern Europe. Powerful forces are pressing for the Community to assert its "identity" by applying its trade policy instruments for protectionist purposes. They do not see the rolling back of economic barriers within as a challenge calling for stronger competitiveness on their part, but as a pretext to shield themselves from "unfair" competition from their superior rivals in non-member states. It would be economically fatal, for Europe as a whole as well as for individual member countries, if a major outcome of "EC 92" were to harness hitherto free markets into a protectionist "Community discipline". 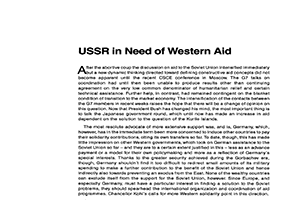 USSR in Need of Western Aid by Klaus Boltz

Intereconomics in the 1990s: The Fall of Communism and the Uniting of Europe