The Nonsense of Antidumping

Article published in the first issue of Intereconomics

In the Federal Republic, the first argument runs that foreign competitors enjoy more advantageous production terms. Since different production terms happen to be the basic condition for a profitable international
division of labour, it seems rather naive to justify antidumping with this very argument. The second argument, though less preposterous, also fails to meet the point: German industry is said to suffer from very high wages and social contributions. Hence, imports should be restricted in order to compensate German industry for what is called "sociaI dumping" of its foreign competitors. However, this argument neglects the fact that high wages correspond to high productivity. A true comparison could only be made by comparing average costs. On principle, industrial countries with capital intensive production and high wages enjoy lower unit costs than countries with low wages. In cases where production costs of labour intensive foreign competitors are lower, there exists a genuine form of comparative cost advantage making international exchange of products profitable. 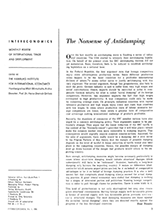 Recently, the chambers of commerce of the EEC member nations have also urged for a common antidumping policy. Their arguments appear to be particularly strange. They argue that the linear reduction of the EEC tariffs in the context of the "Kennedy-round"—provided that it will take place—would make the common market even more vulnerable to dumping imports. This consequence would urgently require common counter-actions. Assumed, for the sake of arguments, there really would be a dumping: did it ever occur to the Pilgrim Fathers of this theory that the margin of possible dumping depends on the level of tariffs? A linear reduction of tariffs would also take place in the competing countries. Hence, the possible margin of dumping must go down because of the danger that products would return to the exporting country.

Sure enough, antidumping measures might become necessary, particularly in cases where short-term dumping would initiate structural changes which subsequently will have to be "redressed". However, basically a long-term dumping only favours the importing country. It makes no difference whatsoever for which reasons import prices are low, be it on behalf of comparative advantages or be it on behalf of foreign dumping practice. It is also a well known fact that complaints about dumping always exceed the actual dumping practice. A great liberal economist once stated that dumping is nothing but a slogan of interested parties and politicians blaming foreign competition in order to pull through claims for protection. There is some truth in it.

This kind of protectionism is not only shortsighted but may also create grave structural consequences. Barring foreign supply with favourable prices in favour of internal supply with less favourable prices prevents necessary structural changes. The most damaging measures are those against the so-called "social dumping", since they are directed exactly against the progress of the less developed countries.