Towards Reform of the Monetary System

The Conference in Nairobi has not only brought us a step closer to reform of the international monetary system; some major decisions in the field of development have also been taken and others were announced. 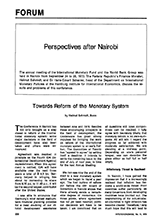 Agreement was reached in principle on the Fourth IDA (International Development Agency) replenishment. When this agreement is ratified, IDA will have available over the next three years a total of $ 4.5 bn. Germany helped in bringing this about by increasing its share from 9.76 p.c. to 11.43 p.c.; it will be the second largest contributor after the United States.

I was able to announce that Germany's most recent medium-term financial planning provides for a near doubling of our official development assistance between now and 1978. Besides these encouraging prospects in the field of development, the Conference has given strong impulses for bringing the work on reform of the international monetary system to an early fruition. The Committee of Twenty has "agreed to agree" by setting itself a deadline: It intends to settle the remaining issue by the end of July of next year, in time for the next Annual Meeting.

We can see now the end of the road to a new monetary system which we began to travel a year ago. The first outline of reform put before the IMF Board of Governors in Nairobi shows that there already exists a remarkable degree of consensus. On those points, where agreement has not yet been reached, political decisions will have to be taken. I am convinced that on all questions still open compromises can be reached. I fully agree with Secretary Shultz that monetary reform is no zero-sum-game. All will win. I regard the progress so far achieved with moderate satisfaction. We are standing at a mid-way point: Depending on one's personal temper, one can describe the glass either as half full or half empty.

In Nairobi, I have gained the impression that it is increasingly realised that inflation has become a world-wide threat. Poor countries suffer particularly, as many Governors from developing countries have pointed out. The responsibility of the industrialised countries to fight inflation has become clearer. Therefore, I very much hope that this will lead to a progressive and continuing cooperation among states. In view of the prevalence of inflationary dangers, certain conclusions concerning the functioning of the future monetary system will have to be drawn. The emphasis in the future system should be on stricter balance of payments discipline rather than on additional elasticities and financing of balance of payments deficits.

I, therefore, welcome that adjustment is the field in which the greatest progress has been made so far. I fully subscribe to the agreement embodied in the "First Outline of Reform" to "combine assessment in the Fund with the use of quantitative indicators". As my colleague, Giscard d'Estaing, put it: Quantitative indicators can never replace human judgement. Germany will support any rule that appears likely to improve the adjustment process. I share the view of many of my colleagues that obligations to adjust should be symmetrical on both deficit and surplus countries.

Many Governors have stressed the need for full convertibility because only full convertibility of national currencies into primary reserve assets and a country's own reserves can assure the symmetry of rights and obligations and the effective control of international liquidity. I am full well convinced that convertibility is meaningless unless it provides for a mandatory multilateral and symmetrical intervention mechanism.

The necessary condition for a satisfactory management of international liquidity would be not only the right but the obligation for full asset settlement. If we would continue to permit the accumulation of reserve currencies and their investment in internationa! financial markets, it would be quite possible that over long periods little or no room would remain for additional SDR allocation. The distribution of growth of reserves among countries would then remain as uneven as it has been in the recent past.

A number of countries have advocated the addition of various "elements of elasticity" to the convertibility rules. On this, I would advise to proceed with great caution. It is the normal function of reserves and balance of payments credits to provide such elasticity. Additional facilities would prolong imbalances and thereby further inflationary pressures.

Future Role of SDR and Gold

In Nairobi, there has been broad agreement that the SDR should become the numeraire of the future monetary system and the principle reserve asset. The disagreement is still over the valuation of this asset. I share the view of those - among them also Minister Aichi from Japan - who feel that the SDR should be made so attractive that central banks actually desire to hold them in their reserves rather than national currencies. That would mean relating the value of the SDR to that of the group of strong currencies.

On gold, I believe, we are quite close to agreement. Gold will remain a reserve asset for some time, it cannot be catapulted out of the system just by decree. But its relative role will decline. The only remaining question is how to make it usable again for transaction between central banks. Without remobilisation of gold a satisfactory functioning of convertibility can hardly be reached: There seems to be wide-spread - although not yet full - consensus that the only practical way to do this is to abolish the official gold price and to permit central banks to buy and sell gold at prices to be agreed between them.

Concern about the Link

The future trading and monetary arrangements should promote the flow of real resources to developing countries. Developing countries should have easier access to commodity and capital markets. The volume of financial assistance should be increased, and its quality should be improved. But it might endanger our objective of achieving greater stability in monetary relationships if this increase in financial assistance were financed through the creation of international money. The link would not simply change the distribution of a given amount of international assets. It would add to global demand an amount equivalent to the link resources without adding anything to real supply. I, therefore, clearly prefer a system in which development assistance is increased by means of taxes and savings of the industrial countries and by better access to their markets rather than by creating inflationary liquidity.

Improvement of the US Balance of Payments

I would like to close my remarks with a word of caution. It is not enough to draw up an ingenuous blueprint of reform. Equally important is the return of the US balance of payments to equilibrium. I am confident that this indispensable prerequisite for monetary reform will be fullfilled by the time the new rules are ready to come into effect. It was encouraging to hear Secretary Shultz saying in his speech in Nairobi that the US balance of trade would be close to equilibrium this year and that surpluses in the trade and the basic balance appear to be in sight for next year. 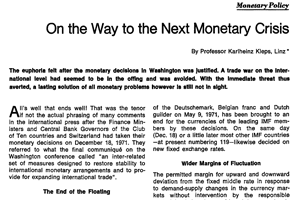 On the Way to the Next Monetary Crisis by Karlheinz Kleps