Upheaval in the International Monetary System

In 1971 Intereconomics moved into its current location along the Inner Alster Lake in the heart of Hamburg. The editorial staff members were primarily male, young and inexperienced, but with their enthusiasm and ambition, they planted the seeds for the long-term success of the journal.

The topics covered in Intereconomics in the 1970s reflect the economic turmoil of the decade. In 1971 US President Nixon cancelled the direct convertibility of the US dollar to gold, which sent shockwaves through the global financial system and led to the dissolution of the Bretton Woods system. Karlheinz Kleps took a negative view of these changes in his 1972 article. The next year, however, future German Chancellor Helmut Schmidt was more optimistic about the reforms of the monetary system.

Other topics that were thoroughly covered in the pages of Intereconomics include the oil crisis of 1973, rising inflation, economic stagnation, enlargement of the European Community, trade protectionism and labour migration.

On the Way to the Next Monetary Crisis

Inflation Worries in the Federal Republic of Germany

Interview with Dr Helmut Schlesinger, Member of the Board of Management of the Deutsche Bundesbank, Frankfurt

Towards Reform of the Monetary System 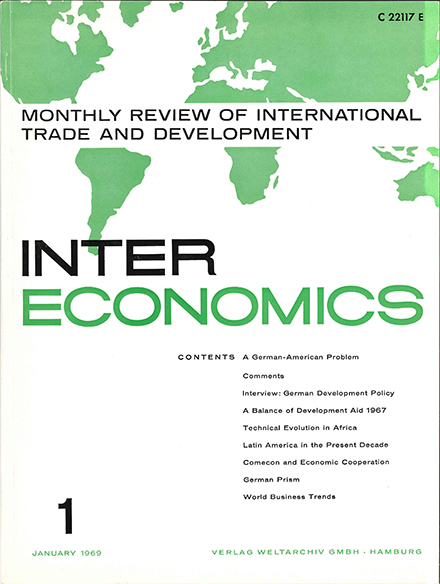